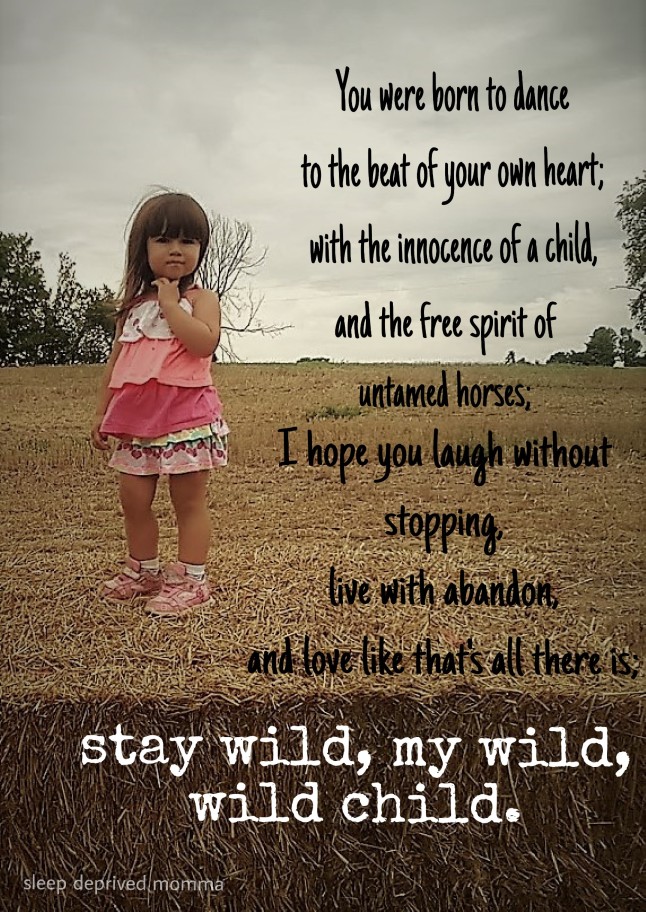 Our beautiful wild child had her 2nd birthday in July. I had every plan to write about it and share some of the preparations we did, and how that special day went, but July was so hectic and August just slipped through my fingers. So here I am, in September, finally getting this done.

Diane is still too young to have any particular preferences. When I was planning for her birthday I asked her what she wanted, and the only thing she asked was to have a cake. Since she likes Paw Patrol just like her sister, I went for a Rubble themed birthday party and made her a Rubble chocolate cake. It’s actually the easiest cake I’ve ever done, and we all think it looks so adorable! 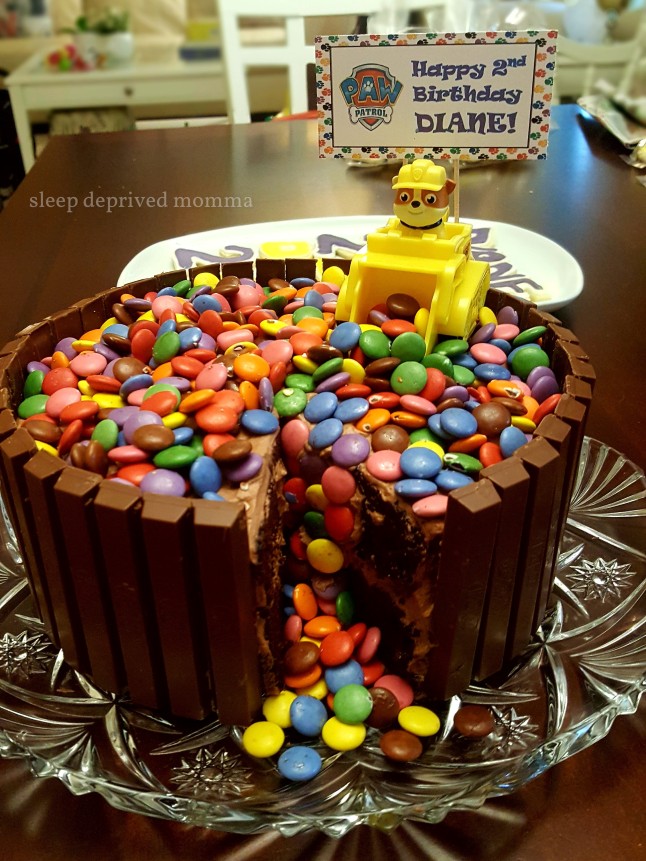 I baked a few dozen sugar letter cookies of her name and the number 2 a few days in advance and made a simple royal icing the night before her party. My husband iced these cookies for me, as I worked on the decorations and preparing the main menu.

Just as I was working on her Rubble table centerpiece, Diane told me she likes purple. And since this was actually the first time she had a colour preference, I had to make sure I incorporate purple in the decor. So I used a purple bucket that we already have to hold the centerpiece. It worked like a charm and it looked so cute! 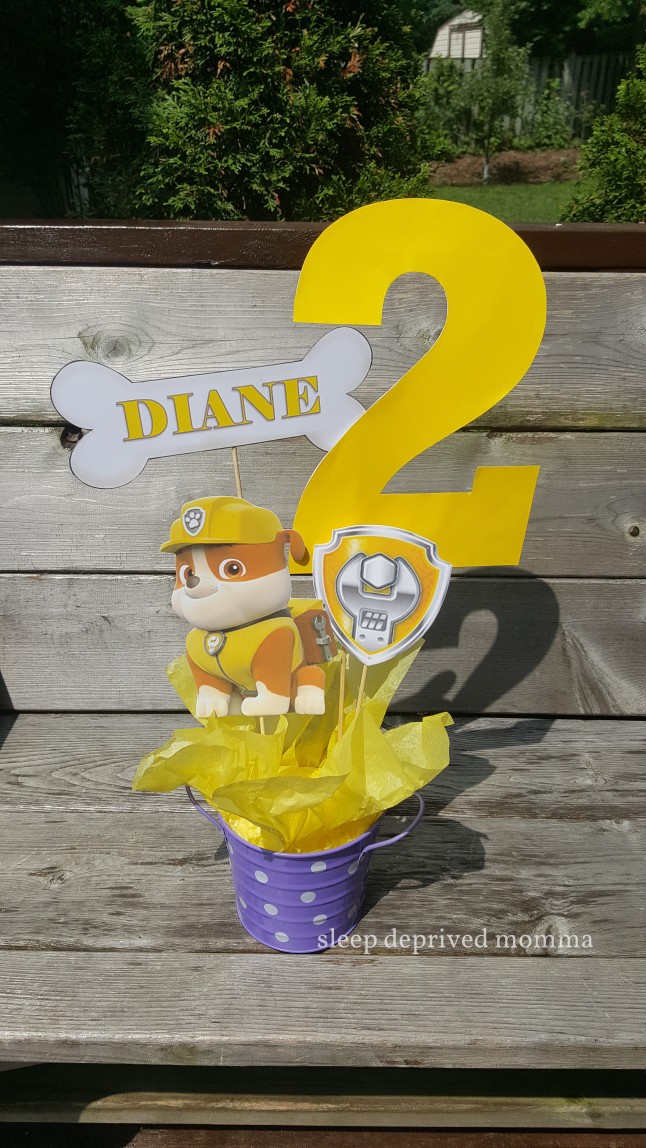 For the birthday favor, I asked my sister to put the sugar cookies, which spell her name + a number 2 in clear bags. And then I printed the “thank you for coming” tags in purple and we attached them to the bags with silver twist ties. Another birthday giveaway we had was some colourful licorice that I asked my sister to evenly distribute on these cute yellow cookie bags I got online. 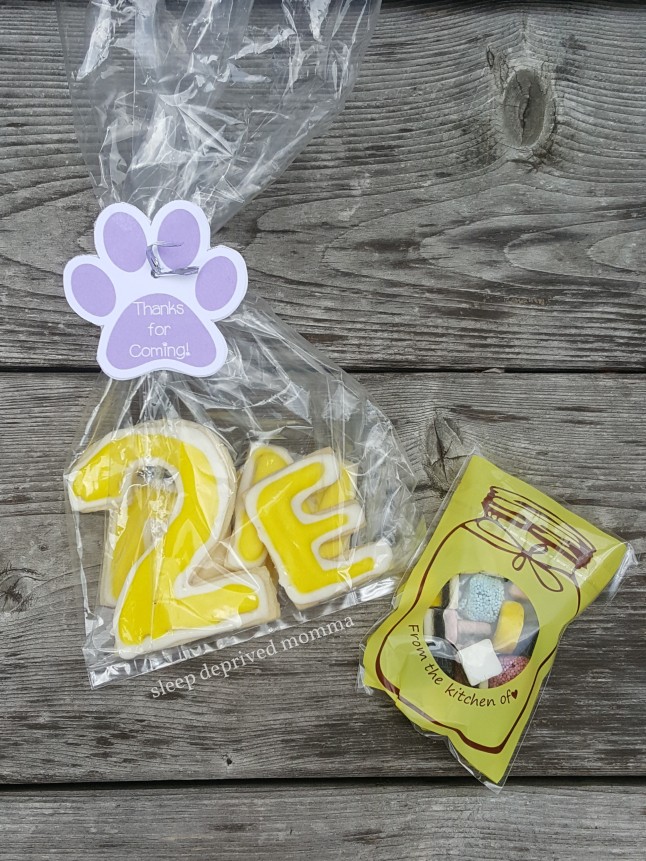 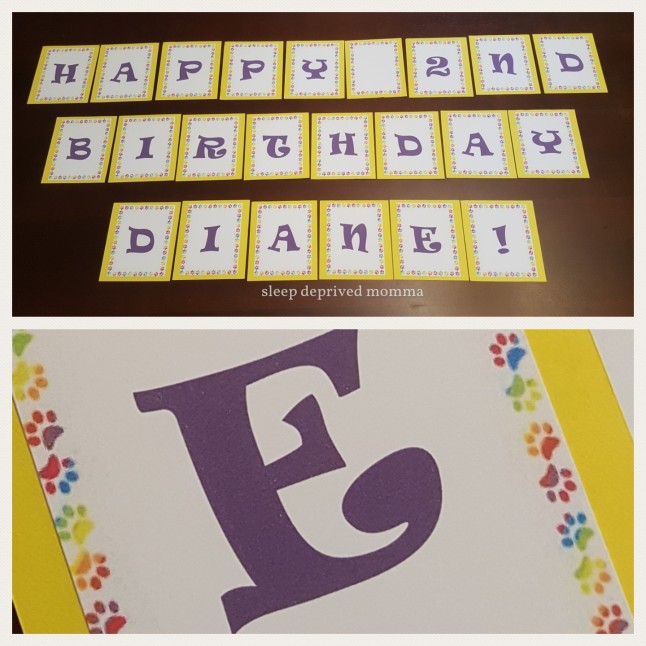 Here’s a photo of the birthday banner I made tying together the purple and yellow colour scheme with some paw prints. 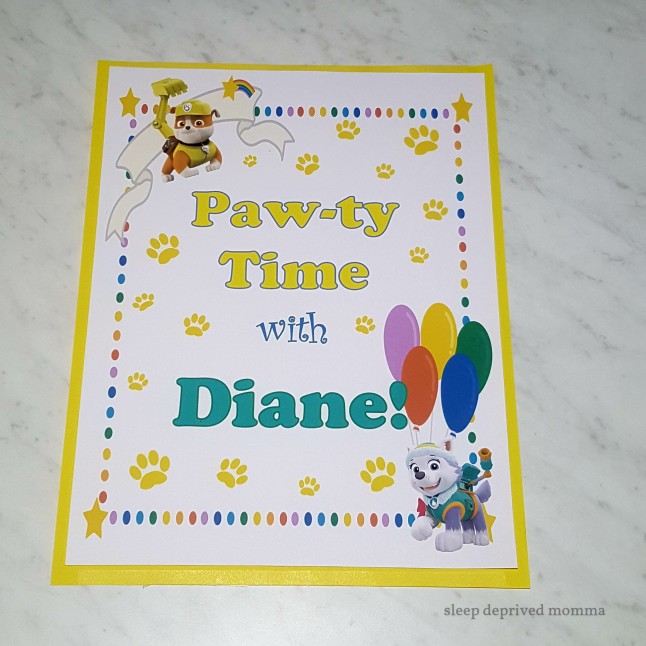 And here’s the birthday door sign that I made in Word and then glued on to a yellow piece of paper. 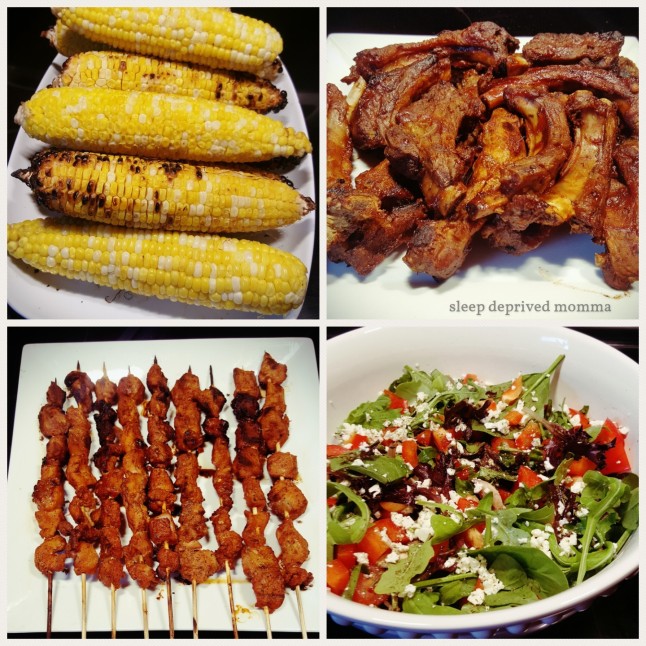 For the main menu, we had some BBQ flavoured ribs, corn, pork BBQ skewers, and spring mix salad. 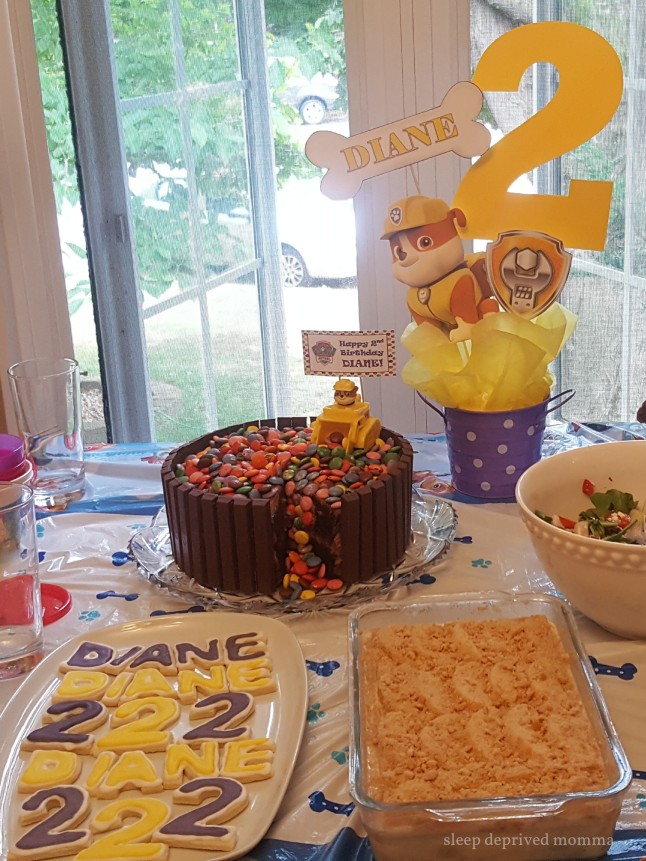 For dessert, we had her cake, sugar cookies, and the peach float that my sister made specially for her birthday.

Initially, we were planning to have the party in our backyard, but since it rained that morning of all days, we decided to bring the party indoors. 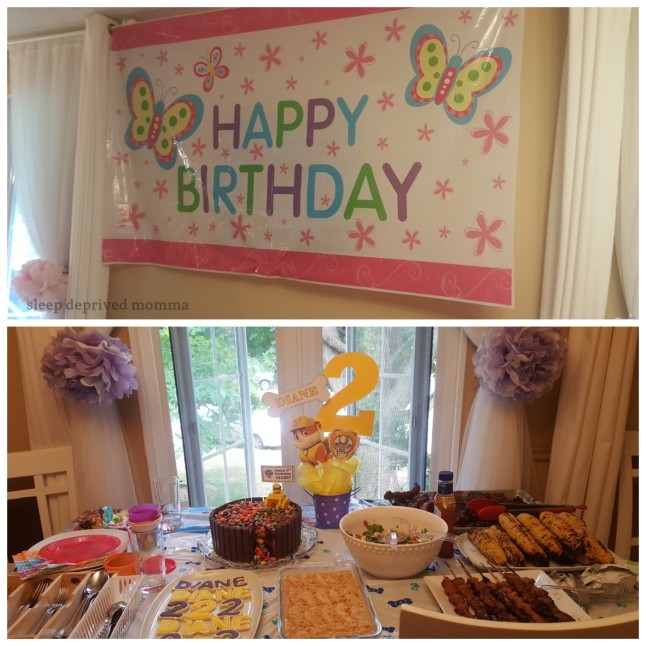 Diane was pretty excited when our guests started to arrive. She played with the kids while Ian and I visited with their parents. Later that afternoon when the sky cleared up, we went to the backyard for some games. The kids had a scavenger hunt for plastic eggs packed with treats that were buried in the sandboat that we recently built. And then Ian did sponge relay with the kids. They sure had fun! After we got our kids cleaned up, we went back inside for some dessert. We sang Diane a happy birthday and cut her cake. She happily ate a good portion of it and then went back to playing again with the other kids. 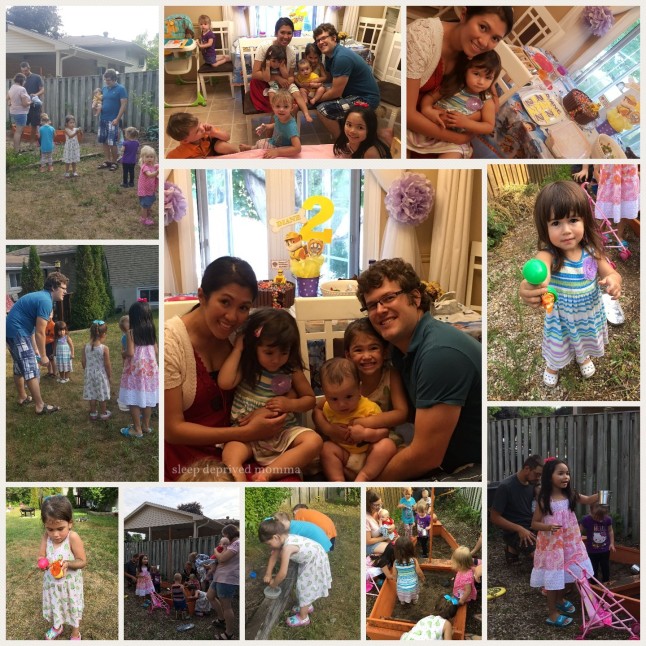 The next photos are snippets of her excitedly opening some of her presents! The sheer delight of ripping tissue paper as she opens the gift sends her off to the moon! 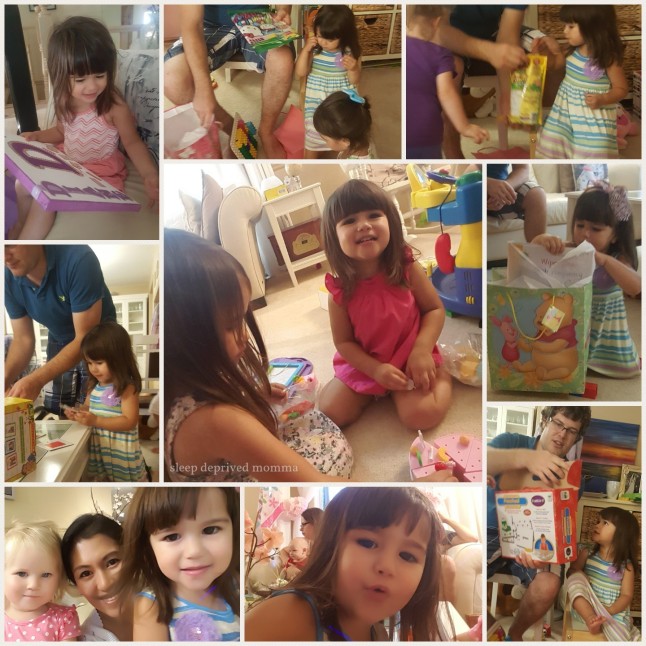 On her birthday, a day prior to her party, we had S’mores in our backyard. It was a treat having my family around! They flew from Nevada and stayed with us for a week. Our girls and their big cousin Sofia stayed in the same room and had a slumber party almost every night. 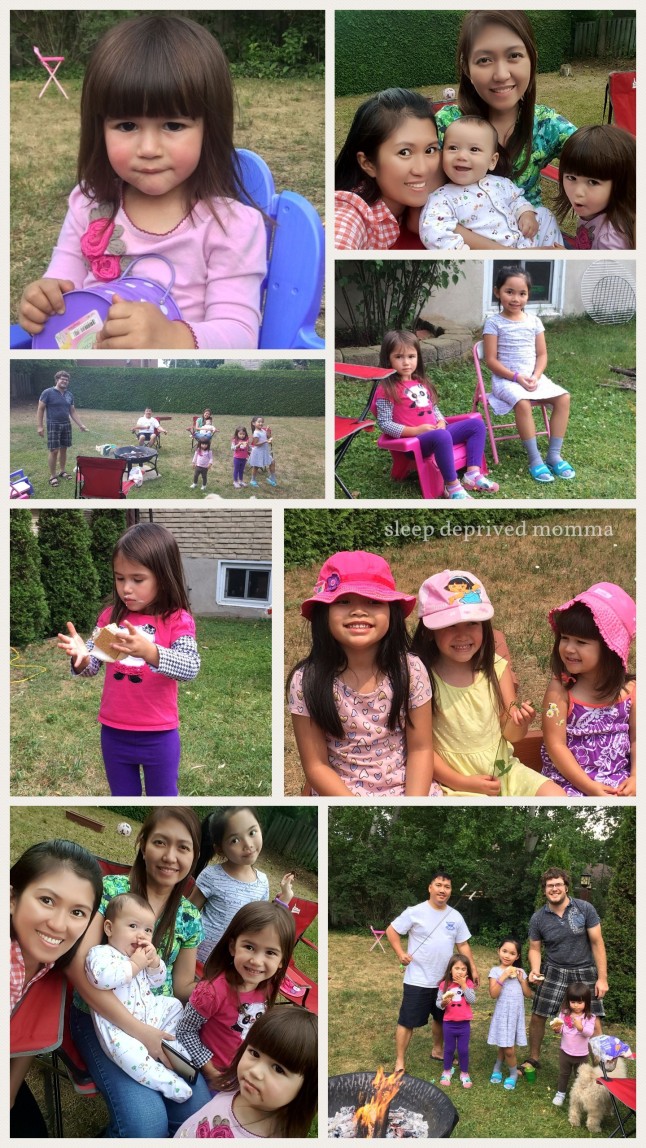 Diane had a blast! Seeing her having so much fun filled my heart with joy!

As much as she drives momma crazy at times, this wild and beautiful child has been such a tremendous blessing to our family! She’s brave and free spirited; sweet and affectionate. The young kids in our church’s nursery and in our Kindermusik class can attest to her loving nature as some of them have been smothered with lots of kisses by this adorable wild child.