“The nights are long, but the years are short.”

I’ve read this once somewhere, and even though our oldest is just 3, it feels like the years are already slipping out of our fingers so quickly. I still distinctly remember when she was born like it was just yesterday. Now, not only do we have a 3 year old, we also have her 19 month old sister, and a baby due 2 days ago, but has decided not to come out yet.

Mira has grown quite a fascination with Paw Patrol so I thought it would be the perfect theme for her 3rd birthday party. She was pretty excited about it and helped me with some of the preparations.

I worked on her birthday banner first.

Then her cupcake toppers.

After that, I made some popcorn boxes using white cardstock and decorated it with paw prints. And then I cut off individual paw prints with “thank you for coming” on it, punched a hole on them and then set them aside.

As for food, I made some of them ahead of time as I knew I wouldn’t be able to do it in one shot.

I baked 8 dozens of sugar cookies, cut out to spell her name, and her age almost 2 weeks in advance and then froze them. I thawed it the night before the party and put royal icing on top.

My husband volunteered to bake her cake. He knows how to bake so I did not protest. I was actually relieved to have that checked off my list. I agreed to him baking the cake, provided I decorate it. I opted for a dog bone shaped cake to go with her Paw Patrol birthday theme. I used a combination of whipped cream icing and buttercream icing made from scratch and decorated the cake the the day we had her party.

Two days before her birthday, I baked about 5 dozens of chocolate and rainbow cupcakes that we store in the fridge (a.k.a. our garage which happens to be colder than our fridge during this time of the year!). And then I topped it with whipped icing on the day of her party.

The first main dish I made in advance is the BBQ pork skewers. I cut off 6 lbs of pork loin into cubes and marinated them for 2 days. Click here for the recipe. My husband strung them to the bamboo skewers that I soaked in water overnight and grilled them on our propane BBQ grill outside before the party started.

Another main dish I had to make in advance is the pasta sauce. I like making homemade pasta sauce rather than buying the ones in the jar. Dozens of tomatoes went into this huge pot among other things like celery, carrots, sweet peppers, mushrooms, onions, garlic, herbs and spices. And for the meat, I used 3 lbs. of ground pork and half a dozen Italian sausages.

I wasn’t able to take individual pictures of the other dishes. I knew it would come to that in end when my day just got too busy preparing the food. I made salmon spring rolls for hors d’oeuvres with sweet chili sauce for dipping.  You can check the recipe for that here.

I also made some crock pot pulled chicken that I paired with butter top dinner rolls.

For salad, I made baby kale salad with grape tomatoes and grated feta cheese. This has been my favourite salad lately. It has quinoa, roasted pine nuts, fresh basil, and homemade salad dressing.

Mira had a great time playing with the kids that came. She had a blast! While the little ones run around happily, my husband and I had an awesome visit with their moms and dads sharing baby and parenting stories.

We bought a Paw Patrol Skye pinata at Wal-Mart that I stuffed with candies and chocolates. Apparently, this pinata was pretty sturdy that none of the kids were able to put a dent to it. So the adults gave it a try.

It was hilarious to see the dads attempting to break it open by hitting it as much as they could. No chocolates and candies fell off despite all their effort. It was hilarious! I ended up opening the flap and just dumping all the goodies on the floor for the kids to pick up.

The hours went by so fast when you’re having so much fun! Six hours later we said goodbye to the last family. It was already around 10 in the evening.

We were having a bunch of other people the next day for her birthday so my husband and I tidied up the house before we went to bed. I also attempted to reconstruct the cake for the next day since we already cut it up. I used the left-over chunks of cake from when my husband carved the bone and attached them using toothpicks and then iced it with whipping cream. Surprisingly, it worked! So we were able to have a cake again for her the next day.

The Sunday party started at 3pm. We invited some of the Filipinos in the area that we have come to know over the years since we moved in to our little town. 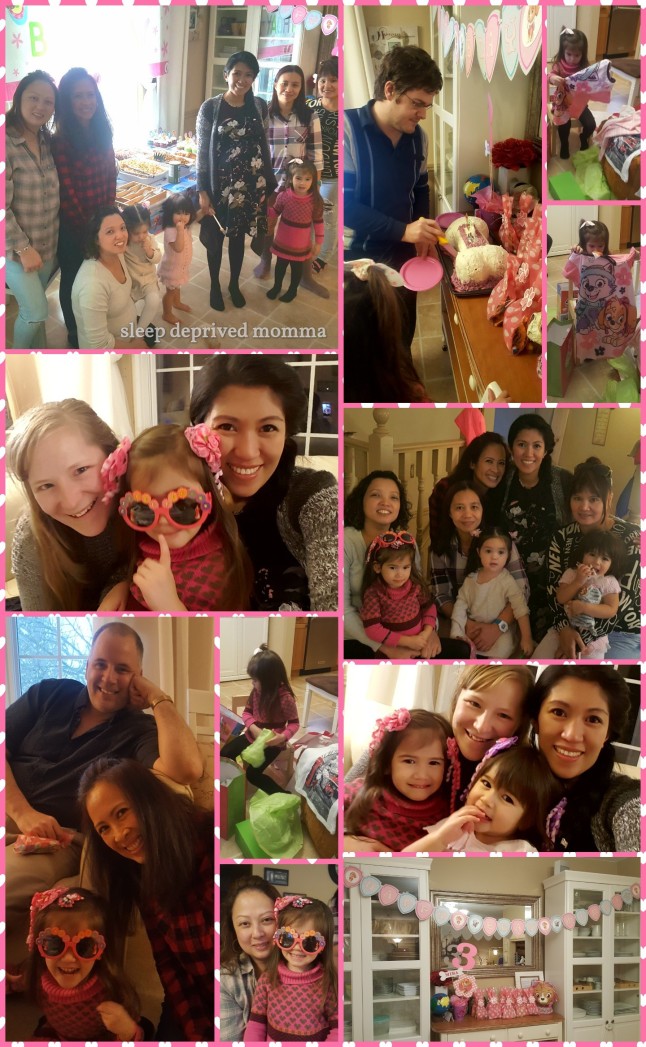 There weren’t much left over from the previous party other than the desserts and the pasta with homemade spaghetti sauce (I made lots so we can freeze them too for when the baby comes!), so I had to cook other main dishes.

I made one of my favourite Filipino dishes, palabok. It uses cornstarch noodles or rice sticks, topped with this amazing sauce, and garnished with shrimp, cut-up boiled eggs, chicharon (pork rinds), and green onions.

I cooked some more Salmon spring rolls with sweet chili sauce for hors d’oeuvres. I also made the same salad we had the day before (have I mentioned already how much I love this salad?) and then Ian grilled some BBQ pork skewers again on our propane grill.

I had some marinated milkfish (my favourite fish!) that we fried on a grill skillet.

I almost forgot to cook rice, which would have been a crime in a Filipino party. So less than half an hour before people started to arrive, I threw 4 cups of uncooked rice into our rice cooker, and plugged it in. My funny husband said that if I had not remembered to cook rice, the Filipinos might start boycotting our parties.  Haha!

Mira was thrilled to have a 2-day birthday party! She even mentioned it to my midwife during one of our appointments. She was proud to be turning 3! It was a lot of work, but it was all worth it to see her excited! She was very eager to help with creating the banner, putting together the favour boxes and treat bags, baking cupcakes and cookies with me, helping her daddy bake her cake, and setting up the table.

We put some caramel popcorn in her popcorn boxes, and some chocolates and candies in her treat bags. She was pretty happy to hand them out to her guests after her party. 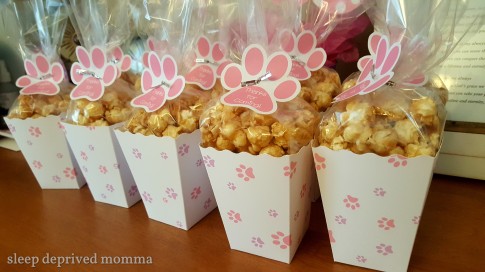 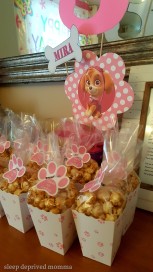 I also made her a table centerpiece using her favourite Paw Patrol character Skye and her 2 favourite colours, pink and purple.

Now that the craziness and the busyness preparing for her birthday is passed us, we are now excitedly (and anxiously!) waiting for the arrival of our new baby!

One thought on “Our oldest turned 3!”