We left our house in Port Elgin just before 3 in the afternoon. As soon as we dropped off Sandy at the kennel in Tara, we made our way to Stratford. Ian’s friend, Devon, who was driving with us for the first leg of our trip, wanted to look at a 7 string Russian guitar that his distant relatives owned so we stopped by at their house in Stratford. The town was very quaint. Almost picturesque. We didn’t really get to look around but we heard that it is well known for their theatrical plays.

After a couple of turns upon entering town, we arrived at a white house with a blue door. It was 5 minutes before five. Devon rang the bell as Ian and I unloaded the girls out of the van. The musician couple opened their door and welcomed us with warm greetings. We also met with a musician friend of theirs who was visiting them for the day. The couple showed us some of their keyboard collection. They have 8 keyboards in the house including 2 grand pianos!

We chatted over some delicious light snacks. Time slipped by quickly. It wasn’t until Diane started to get a little fussy that we decided to hit the road again. So we said our goodbyes and loaded the girls back in the van and drove to Mississauga.

After an hour and a half of driving, we arrived at Four Points Hotel, our home for 2 nights and 3 days. It was shortly before 9 in the evening. The sky was getting dark. We all got out of the van and entered the lobby. I didn’t think much of the hotel. It was simple and looked small. Nothing stood out of the ordinary. I could smell the chlorine while we were waiting at the lobby so I knew the pool was somewhere close by. I didn’t expect much of our room based on my first impression of the hotel.

Ian got our key cards. We were staying in Room 416. Devon, in the room just above us. The receptionist said that our stay comes with a continental breakfast that starts at 6 until 11. Once everything else was settled, we walked to the elevator. Mira was eager to push the elevator button. We all got in. The doors shut after us. When it opened, it was our floor, so we all got out, except for Devon.

Mira wanted to use the key card to open our room. So we let her. With our help, she managed to open the door. The first thing my eyes caught was the hardwood floors. It was dark brown. And then there’s a massive carpet sprawled in the middle of the room. There were heavy curtains hanging on both ends of the window; cream colour with a thick red stripe across. The room was long, with a short wall dividing it. On the farthest side of the room beside the window was a queen size bed in white linen bedsheets and 4 white pillows, with 2 night stands on each side of the bed.

On the other side of the wall was a red pull out sofa bed, a round side table on its left, and a small rectangular coffee table in front of it. A big flat screen TV hanging on the wall was facing the sofa. Beneath it was a long skinny console table. On its left was a black mini fridge. As my eyes scanned the room, Diane walked around to explore it too.  Mira on the other hand, ran happily from one side of the room to the other, enjoying the big space.

When I turned to face the door, I noticed the rectangular mirror in the entrance way. It was enclosed in a dark brown frame with some hooks at the bottom. Facing the mirror was the bathroom door. There was no tub, but the bathroom had a big shower. It looked very modern.

Ian, Devon and Mira went out to grab some pizza while I stayed with Diane and set up the play pen she will be sleeping in. I tried putting Diane to sleep but she was still wound up after napping in the van. The gang came back with 2 large boxes of pizza from Pizzeria Del Sassi. The smell of fresh authentic Italian pizza permeated the air. Mira got so excited! 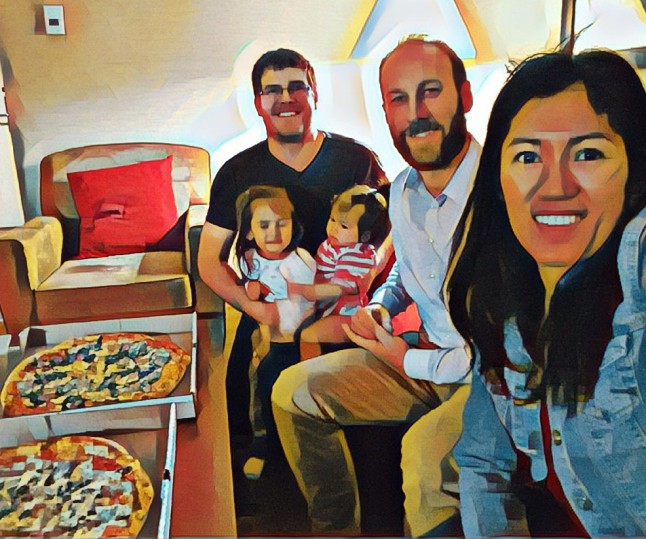 Every bite was scrumptious! I liked the one with the rapine. It was something different from the regular pizza I’ve had in the past. Two large pizzas, but only 3 slices were left once we were done.

Ian set up the pull up sofa bed for Mira to sleep in. After nursing, she went straight to bed. Diane on the other hand, had a hard time going to sleep. Between my arms and Ian’s, she went. We rocked her back and forth, patted her back and sung her songs. Eventually she gave in. So Ian and I were able to get settled, ready for bed ourselves. The room was finally quiet. No loud traffic noises from the outside unlike most of the hotels we have stayed in. I thought to myself, “I’m going to have a really good sleep”. And this marked the end of our first day.